The Ultimate Guide to Oreos 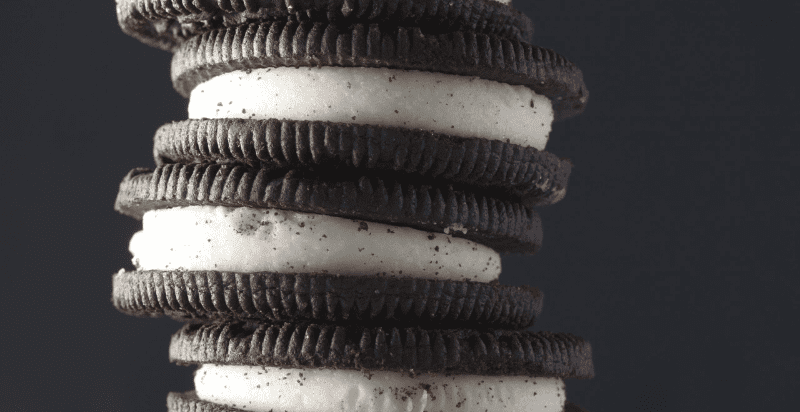 In 1912, the very first Oreo cookie was introduced in the United States. The origin of its name is still a bit uncertain. Some claim it’s a word derived from related French or Greek phrases, while others say it’s a composite of crème and chocolate.

Oreo cookies are delicious and vegan-friendly. That’s correct. no animal products are used in the making of Oreo cookies. In addition, Nabisco eliminated animal lard from its recipe, making it a kosher snack.

Oreos are a delicious cookie that consists of a white cream filling with two chocolate wafers on both sides. They are fun to eat and also fun to play with since you can pull the wafers off and eat them separately if you want.

The National Biscuit Company, popularly known as Nabisco, was founded in 1898 when numerous baking enterprises united. This was the start of the company that would go on to create the popular Oreo cookie.

Barnum’s Animal Crackers were initially introduced in 1902 by Nabisco. They made them prominent by selling them in a small box shaped like the circus animal cage. The box had a string attached to ensure the box could be placed on Christmas trees.

In 1912, Nabisco came up with the idea for a new cookie. It wasn’t completely unique. Sunshine Biscuits firm had already done two chocolate disks with a crème filling in between in 1908. It was dubbed Hydrox. While Nabisco has never claimed Hydrox as its inspiration, the Oreo cookie was quite similar to the biscuit that came before it. The two decorated chocolate discs are sandwiched between white crème.

Despite its questionable origins, the Oreo created a reputation for itself and swiftly outperformed its opponent in terms of appeal. On March 14, 1912, Nabisco filed a trademark application for the new cookie. On August 12, 1913, the request was granted.

Move over, Oreos! Australia’s Tim Tams are taking over the world!

The cookie was first created in 1912 as an Oreo Biscuit. It was altered to an Oreo Sandwich in 1921. In 1937, the firm changed its name to Oreo Creme Sandwich before settling on the moniker Oreo Chocolate Sandwich Cookie. Finally, the name was chosen in 1974. Despite the rollercoaster ride of official name changes, the cookie has always been referred to as “Oreo” by most people.

How Did Oreos get their Name?

So, where did the “Oreo” name come from in the first place? The employees at Nabisco aren’t sure. Some say the cookie’s name comes from the French word for gold, while others say it’s a combination of the two (the primary color on the early Oreo packaging).

Others suggest that the name Oreo came from the hill-shaped test form that never made it to shelves of stores and that the cookie prototype was named after the Greek word Oreo, which means “mountain.” Some think that the name comes from combining the “re” from “cream” and inserting it between the two “o”s in “chocolate.” This results in “o-re-o.” Finally, others state that the cookie was given Oreo’s name since it was short, entertaining, and easy to pronounce.

Even though the actual naming procedure may never be disclosed, Oreo sales have not suffered as a result. On the contrary, since 1912, the number of Oreo cookies that have been sold is an estimated 450 billion. This is firmly establishing the brand at the top of the cookie sales and capturing the hearts of millions.Kinder

Bueno Ice Cream – A Summer Treat for All

Oreos are sandwich cookies consisting of two firm chocolate cookies cemented together with vanilla frosting. The initial Oreo cookie was a little bigger than the ones we have now.

The Oreo’s original recipe and iconic look have not been altered much over the years. However, Nabisco has been releasing limited-edition new looks and tastes alongside the classic for years. As the cookie’s popularity grew, the business began selling different variants of it. Nabisco introduced its famous Double Stuf Oreos in 1975.

Aside from color variations, chocolate discs’ pattern has remained the same throughout the cookie’s ambitious new flavors. The wafer design is the design that has lasted the longest, having been introduced in 1952, has stayed essentially unchanged since then.

The delicious fillings that have resulted in the cookie’s success haven’t changed much when it comes to the Oreo recipe. It was created by Sam Porcello, Nabisco’s “principal scientist,” also known as “Mr. Oreo.” Outside of a few limited-edition variations, his formula for the original crème hasn’t changed much since 1912.

From Prickly to Delicious: How Cactus Candy is Made

The Oreo design and recipe are far from broken. Thus, according to Nabisco and the rest of the globe, there is no need to fix them. Oreos are popular as they are and will continue to be for years to come.

You can find your favorite Oreo in over 25 flavors. The spectrum ranges from chocolate cream to hot chicken wings. Some popular flavors include mint, golden, chocolate crème, lemon, salted caramel, coconut, latte, tiramisu, and pistachio flavors.

Video: We Tried EVERY Oreo Snack

If you have ever had a passionate argument about which Oreo flavor is “best” or just want to see them all, check out this video. It is hilarious and fun.

You Won’t Believe the Low-Calorie Junk Food Options We Found!

How Many Oreos Are in A Pack?

Each pack has six Oreos.

How Many Calories in Oreos?

The number of calories found in 6 Oreos is 160 calories.

The traditional Oreo Cookies have wheat flour. This means that they have gluten. However, there are plans for Nabisco to start making gluten-free varieties.

Where Are Oreos Made and Produced?

The Hershey’s plant in Hershey, Pennsylvania produces the majority of Oreos. In 2017, Oreo cookies were produced in 18 different nations, totaling more than 40 billion every year.

What Are Mega Stuffed Oreos?

OREO Mega Stuf Cookies are for individuals who prefer their OREO cookies to have even more crème in them.

What Are Deep Fried Oreos?

This is a snack or dessert that consists of Oreo dipped in batter and then deep-fried. This is always a HIT at county fairs in the United States, especially in the Summer and Fall.

How Do You Deep Fry Oreos?

Heat oil in a deep pot to about 350 degrees F. Mix pancake mix, milk, egg, teaspoons, vanilla, and vegetable oil in a bowl. Dip the Oreos into the batter, which is thick enough to form a coating. Place it in the oil and cook for about 3 to 4 minutes until it turns golden brown. Place the Oreos on the serving plate.

Oreos. The finest part of an Oreo is the creamy middle, which is shockingly not created with milk. Instead, it’s manufactured with corn syrup and canola oil.

Originally Oreos contained lard (pork fat) but in the 1990’s they changed the recipe. Oreo Cookies do not have any ingredients derived from animals and hence are safe to eat for the Vegans. And they are also kosher.

How Many Oreos Are There in A Package?