Tim Tams is easily one of the most popular snacks in Australia which have garnered many  admirers around the world, especially in the United States. The unmatched popularity and demand for this snack has even earned it the honor of being “The Legendary Australian Snack.” So join us as we take a look at the history, taste, and nutrition of this beloved chocolate-coated snack!

The legendary Tim Tams was invented by Alan Morrow and Ian Norris, the director of food technology at Arnott’s Biscuits (Arnott’s), sometime after 1958. During 1958, the two set out on a world tour in search of ideas for new products. They came across the Penguin biscuit while in Britain and set their minds on creating a better version of it.

In this effort, the two ended up creating a bar with two crunchy biscuits sandwiched together and covered in Arnott’s unique chocolate called Tim Tams. This new biscuit, which would soon go on to become Australia’s most legendary snack, was unveiled to the world in 1964.

In 2016, Arnott’s reported sales of 500 million packets of Tim Tams, demonstrating just how popular the snack is in Australia. Tim Tams was previously only sold in the Asia Pacific region, however, in early 2017, Arnott’s introduced Tim Tams in the United States as well, allowing Americans who were yearning for a taste of Australia to do so.

How Do the Legendary Tim Tams Taste?

The original Tim Tams boasts three primary features: a rich chocolaty flavor, thickness, and a variety of textures. The thickness of a typical Tim Tam is roughly 15 millimeters. On the outside, it has a silky chocolate coating, and on the interior, there is a bed of pillowy, soft chocolate between two layers of crisp chocolate biscuit.

The result? The loveliest combination of crunch and creaminess you have ever had! As soon as you bite into Tim Tams, you’re greeted with a crisp layer of biscuit on both sides followed by the soft and slightly dense chocolate center, which some have found to be reminiscent of Kit Kat.

On the other hand, other snack lovers have claimed that the sandwiched chocolate biscuit bears a greater resemblance to Twix but with half the length and two or three times the width.

The smooth premium quality chocolate coating on the exterior and the delicious chocolate cream in the center make for one of the most delectable snacks and memorable eating experiences.

The best part is that the smooth velvety chocolate of the biscuit imparts your tongue with a silky texture and leaves a lasting impression on your taste buds that makes you want to go for another piece.

Normally, Tim Tams can be found in regular or value pack boxes and you can get 10-20 pieces of Tim Tams depending on which one you choose.

The popularity of the snack naturally made Arnott’s, the manufacturing company, want to add more flavors to their product line and so they did. Following are all the classic flavor options of Tim Tams that the company currently offers:

In addition to all the classic flavors listed above, Tim Tams also offers various deluxe flavors which are:

It is worth keeping in mind that some of the flavors mentioned above, both classic and deluxe, might not be available in the United States. 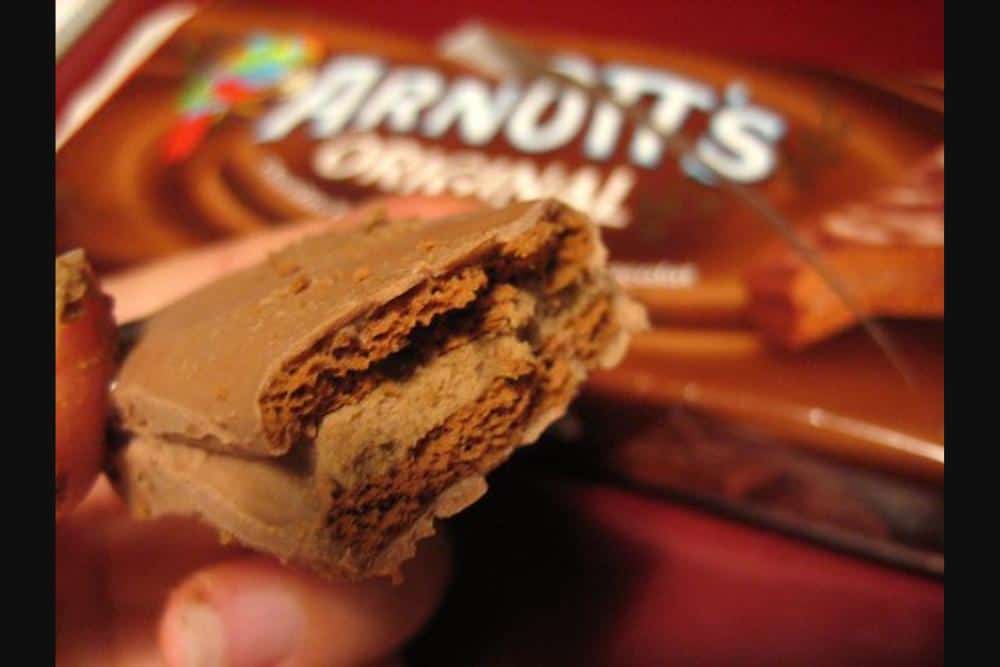 In the past years, Arnott’s has released a range of special flavors of Tim Tams either to commemorate a certain holiday or occasion or to entice a broader range of audience.

Read ->  The Ultimate Guide to Oreos

In 2004, Arnott’s released an alcoholic flavored version of the Tim Tam called Tim Tam Kahlua Mint and Tia Maria. However, the flavors were met with criticism, which was to be expected, with the Australian Drug Foundation claiming that normalizing the flavor of alcohol in a snack that was readily available to kids could be harmful.

There is also a Tim Tams cheese flavor, made specifically for the Indonesian market since that is where Halo Arnott’s manufactures Tim Tam biscuits.

Again, working with Zumbo, Arnott’s introduced the flavors Coconut Cream and Choc Raspberry for Valentine’s Day in 2015. Some other special edition flavors are as follows:

The serving size for Tim Tams consists of 1 biscuit which equates to 18.3g. The nutritional facts per serving for the Original Tim Tams are as follows:

Irish people slam some Tim Tams! But did they love them? Arnott’s, an Australian biscuit manufacturer, debuted the Tim Tam brand of chocolate cookies in 1964. It comprises two malted cookies sandwiched between a light, creamy chocolate filling with a crunchy texture and covered in a thin layer of smooth and silky chocolate.

This brand of cookies, or biscuits as many people call them, has won the hearts and taste buds of thousands of snack lovers around the globe. As a matter of fact, Tim Tams have even been hailed as the best cookies ever.

The only drawback to Tim tams is that, being an Australian snack, it is pretty hard to find in the United States. While you can still get your hands on the original Tim Tams, finding the other classic and deluxe flavors is near to impossible. That being said, we highly suggest you try out these fantastic chocolate sandwiched cookies, they’ll blow your taste buds away for sure!

Are Tim Tams Available in the US?

Tim Tams can be found in all major grocery stores and supermarkets in the United States. However, only some of the flavors are available.

A Tim Tam consists of two chocolate malt biscuits sandwiched together with a chocolate cream filling in the middle and covered in a thin layer of milk chocolate.

Penguins were a British snack and the inspiration behind Tim Tams. Penguins were introduced approximately 30 years before Tim Tams were invented.

Review of the Lik-M-Aid Candy

“Tim Tam’s” by trekkyandy is licensed under CC BY-SA 2.0.

“The inside of a Tim Tam” by joyosity is licensed under CC BY 2.0.