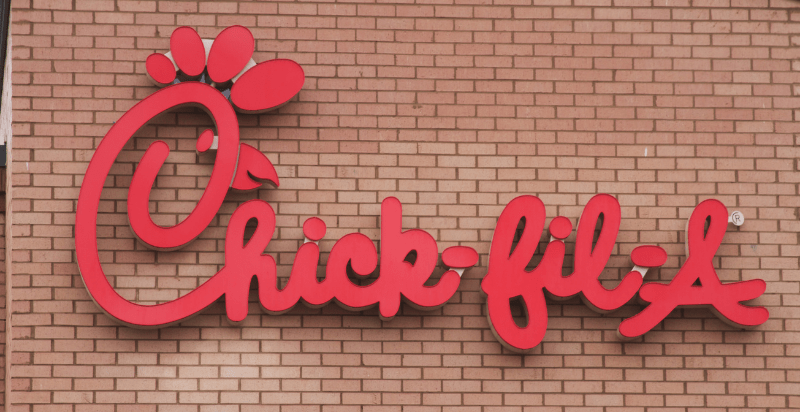 Samuel Truett Cathy opened a diner in 1946 with his brother, Ben, called The Dwarf Grill in Atlanta, Georgia. Later the Dwarf House was renamed to The Dwarf House. In 1967, the founder opened a restaurant in Atlanta’s Greenbriar Shopping Center, this restaurant was the first Chick-fil-a. (Note: you can find the one nearest you on their website). The restaurant moved outside of the shopping center and had its first restaurant that stood on its own in 1986.

Samuel Truett Cathy was not just a restaurant owner though, he also was a very dedicated philanthropist, and dedicated his time to helping to make a difference, especially in the lives of youth. He also wrote and published six books and received awards for his charity(the chick fil-a foundation)  and his business.

Since 1973, Chick-fil-a has given over 35 million dollars to its crew members for college scholarships,Truett Cathy believed in giving people opportunities though he never attended college himself. Cathy was a religious man, his life was set around his family and biblical principles. Even though Truett Cathy passed away in 2014, his family and successors honor him by continuing to run the business as he did with the same principles in mind.

The Original Chicken Sandwich on the menu was perfected in 1964 by Samuel Truett Cathy himself, he tried out hundreds of recipes in order to land on the recipe that is continued to be used today. Fresh biscuits, and fresh lemonade are made everyday in the kitchens of each restaurant.

Chick-fil-a menus feature items like chicken nuggets (grilled and crispy), grilled chicken sandwiches, crispy chicken sandwiches, and salads as their entrees. Their side menu features items that include, waffle fries, potato chips, apple sauce, fruit cups, soups, and mac and cheese. They have convenient kids meals that offer nutrition, milkshakes and cookies if you have a sweet tooth, and a pretty good variety of a drink selection to wash it all down. Although their menu is already big enough, Chick-fil-a has some secret menu items you must know about.

This item was suggested on the Chick-fil-a blog, to create a Cookie Icedream Sandwich, you can order two of their chocolate chip cookies and a small soft serve ice cream. When you get back to your table, or to your house you can then put the ice cream in between the two cookies to make this menu secret.

The menu features a Grilled Chicken Club sandwich that includes lettuce, tomato, bacon and provolone cheese. Instead of the grilled chicken in between those buns, you can have them swap it out for crispy fried chicken instead to create a fried chicken club sandwich.

You may not get the liquid cheese you are thinking of when you think of cheese fries, but ordering your waffle fries with a slice or three of cheese on top can turn the waffle fries into cheesy waffle fries.

The chick-n-minis are the size of the hashbrown circles that Chick-fi-a serves up. Simply order both of the items and add the hashbrowns in with the chicken. You can even top the combination with a sauce of your choice to add extra flavor. You can even order cheese slices on the side to add some to those Chick-N-Mini Masterpieces.

Although this item is not on their regular menu, you can politely ask the team member to make you a root beer float to complete your order. If the team member doesn’t quite know how to make it, ask them to give you a regular sized vanilla milkshake with their soft serve ice cream but put it in a large cup instead and then pour root beer over the top. Even if you aren’t a fan of root beer, you can order the float with any beverage of your choice, even the fresh made lemonade that is on the Chick-fil-a menu.

There is much love for Chick-fil-a’s waffle fries, but a lot of people prefer an extra crisp to them. The trick to ordering this menu secret is to ask for your waffle fries to be ‘well-done’ and you should receive a serving on crispier waffle fries for that extra crunch that you’re desiring.

This is another secret to the menu that you can order items and place them together yourself. Order any of Chick-fil-a’s tasty and delicious chicken sandwiches, even one off of this list if you choose, and then order a side of mac and cheese. When you get back to your table you can combine the two by adding the mac and cheese on top of your chicken. To add something extra you can order a side of BBQ or Buffalo sauce to put on top of the Mac and Cheese Chicken Sandwich, making it even tastier.

You may need to get up early enough to order this hidden gem because it is a breakfast item. Just order the chicken, egg and cheese bagel and swap out the bagel for a biscuit to create this sandwich. If you want a spicy taste to help wake you up you can swap out the american cheese for pepperjack to make it a spicy chicken, egg and cheese biscuit.

This item compares to In-N-Out’s Double-Double Sandwich. To order one of these, simply ask for a Double Decker, if they look at you funny just kindly ask them to give you two patties instead of one on the sandwich of your choice.

Not all of the restaurants will honor this last item on the list, but most of the restaurants are said to honor it. This one is for the kids though, when you order a kid’s meal from Chick-fil-a ask for them to swap out the toy for a small ice cream cup. Instead of a toy your child would receive a cup with the well-loved vanilla soft serve ice cream.

In this video, Drew and Loryn sample the menu on their “cheat day.” You will get a great taste test walk through and get to visually see all of the menu items.

If you love Fried chicken be sure to also read our post about the Popeyes Secret Menu and of Course the KFC Secret Menu too!

Some people have never had Chick-fil-a and some people go there on a regular if not daily basis. There is no doubt that Chick-fil-a is one of the most popular chicken fast food restaurants in the business today.

Along with this list of menu secrets and hacks, some of the restaurants are even reported to have dog biscuits for your fur baby that is riding with you through the drive-thru. You can swap out buns, add ingredients, or customize the items on the menu to try something new and different. Next time you go to get some of their delicious food, keep in mind that these menu secrets exist and maybe even try some of the items on the list.